Since the 19th century, nature in Singapore has been collected, studied, categorised and exploited. However, there have also been efforts to understand, protect, conserve and nurture. The changing relationship between humans and environment is the focus of this issue. 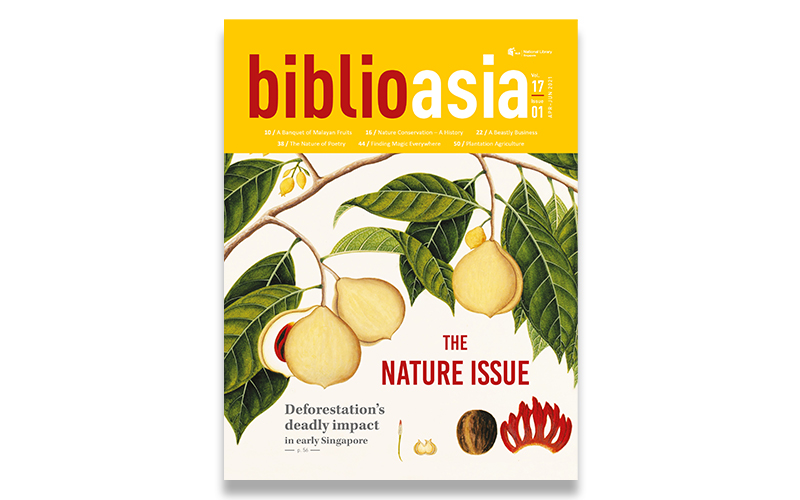 A Banquet of Malayan Fruits: Botanical Art in the Melaka Straits
Who commissioned the beautiful paintings of local fruits in the Dumbarton Oaks collection? Faris Joraimi attempts to unravel the mystery.(PDF)

Nature Conservation in Singapore
Over the last 200 years, the balance between biodiversity conservation and development has evolved, says Ang Seow Leng.(PDF)

A Beastly Business: Regulating the Wildlife Trade in Colonial Singapore
Fiona Tan looks at an attempt to regulate the wildlife trade in Singapore in the 1930s.(PDF)

Man vs Nature: Speculative Fiction and the Environment
Jacqueline Lee looks at works of speculative fiction that imagine a Singapore beset by rising sea levels and mass extinctions.(PDF)

The Nature of Poetry: An Odyssey Across Time
Michelle Heng takes us on a journey to see how poets writing in English have charted the changing contours of Singapore and Malaya.(PDF)

Finding Magic Everywhere
According to Farish A. Noor, much of the magic in Walter Skeat’s book Malay Magic is an illusion.(PDF)

From Gambier to Pepper: Plantation Agriculture in Singapore
Timothy Pwee guides us through the pepper, gambier, nutmeg, pineapple and rubber plantations that once blanketed Singapore(PDF)

Deforestation in 19th-century Singapore
As early as the 1840s, people had already observed that temperatures in Singapore were increasing as a result of rampant deforestation, says Chia Jie Lin.(PDF)

Of Parks, Trees and Gardens: The Greening of Singapore
Lim Tin Seng traces the journey from the first botanical garden in 1822 to the “City in Nature” vision in 2020.in 2020.(PDF)